Must Be a Solar Flare... 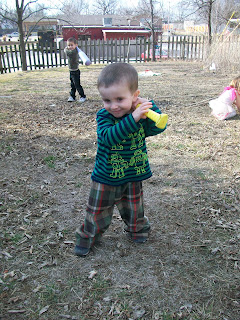 Several times today I had to remind myself we still have at least a month and a half until Winter is over. 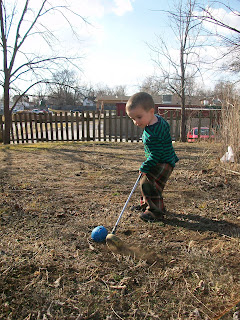 Which is very unfortunate for all of us here with cabin fever.

Today was so beautiful.

Yesterday I hung laundry out. Who does that in January?! 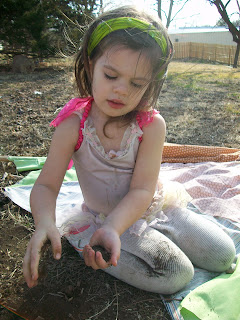 So after the boys got a haircut and played with the cousins for awhile, we came home and had lots of fun outside. 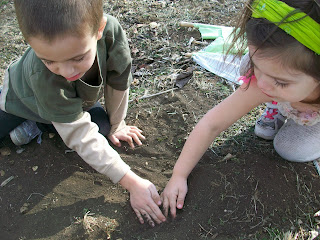 Making a garden and playing store with rocks and dirt. 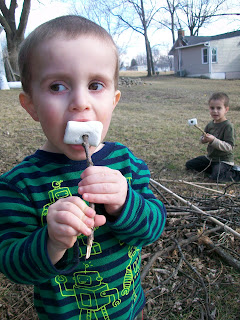 Turns out, it was perfect weather for a pretend campfire and real marshmallows.
Posted by jessie at 11:24 PM 0 comments

Links to this post
Labels: miscellaneous, what I love about

She Don't Mean the Hoover... 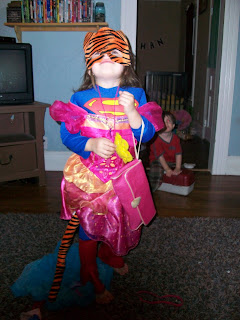 I knew this day was coming. I just didn't expect it for, you know, at least 9 or 10 years.

Ethan came to me after dinner tonight and said Charlotte had said a bad word.

If you know my kids, and especially my daughter, usually the only "bad" words are of the bathroom variety. (And why, by the way, are such things so hilarious to kids? I'll never know.)

But this was not one of the usual suspects.

"Oh? What did she say?" This accompanied by the sigh of a mother who tells her little princess no less than 20 times a day to STOP WITH THE POTTY TALK!

"She said 'Damn.'" He looks at me solemnly. He hopes she's gonna get it.

Ok, at this point what was I to do? Even now, typing it, just typing it I can't stop laughing.
So I took a breath and called her in.

"Did you say that word?"

"Well, thats not a word kids use and if you heard mommy or daddy say it then I apologize because its not something we say. And its certainly not a pretty word for a pretty girl."

Then I sent her away real fast because I couldn't hold back my laughter for much longer.

I told you all last week that I had some news to share.
I wont get into specifics here, but I will tell you that we are going to have a baby! Very much a surprise, and very exciting for all of us as we wait for Zoey to come home.

As we understand it, because of God's amazing timing, this pregnancy won't affect the adoption process at all.

I can't believe I'm going to have 5 kids! And there is the possibility that Zoey and this baby could be so close in age as to be like having twins. That would be pretty crazy.

No other updates about Ethiopia adoptions lately. It is still very slow. There have been a few referrals for baby girls for our agency recently, so that is encouraging. One was for a 3 month old!

We know God has a plan and is working it out. We are not discouraged. We trust in Him and can't wait to see, when this is all done, what He was doing all this time. 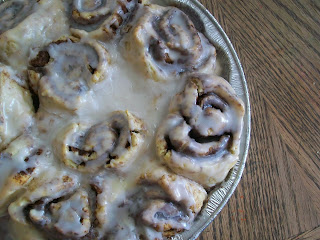 I finally did it.
After nearly 30 years on this planet, I have finally recreated my mom's cinnamon rolls.
I feel like I can do anything.
I can touch the sky.
And I don't think 3 cups of icing is too much for 10 rolls.
Pi-shaw.
That is like saying, "My husband is too handsome" or "My kids are too well-behaved"
or Heaven forbid-
"There is too much bacon on this table."
Too much of a good thing? That only applies to... well certainly not icing. Or bacon.

This was the second pan and really, I contemplated just staring at it and swatting any hands that got too close. Maybe framing it and putting it up on the living room wall?
Yeah, I'm pretty proud of myself.

I can tell it's going to be a great year. Full of all kinds of possibilities.
And cinnamon rolls. 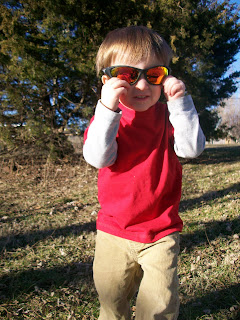 Missouri is so weird. When its January and 65 degrees, we drop everything and hightail it outside knowing that the next day will be cold enough to snow. 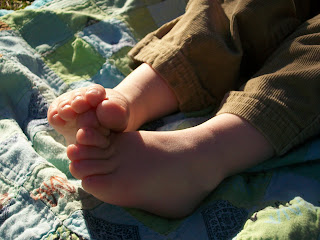 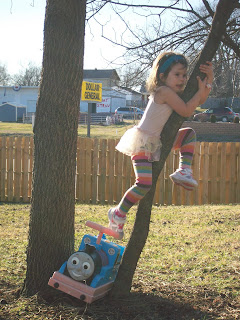 What is it about this girl and climbing trees? I was always scared to climb trees. She has no fear. 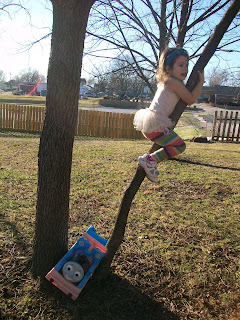 And she looks good doing it too. 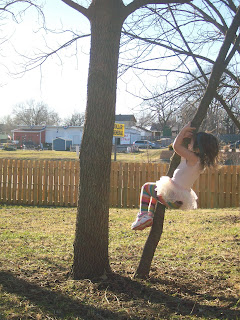 Do you think one of the reasons God made trees is so kids would have something to climb on besides couches and dressers and tables? I wonder if Jesus ever climbed trees.
I'm sure that has some sort of deep theological meaning, but it is too late for my brain to work it out tonight.

I will have some exciting news next week for you all, and I will try to post more this week about what we are up too. See you soon!
Posted by jessie at 11:10 PM 1 comments 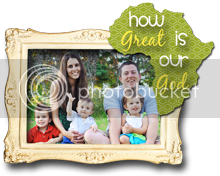