Yes, we are one of Those Families... 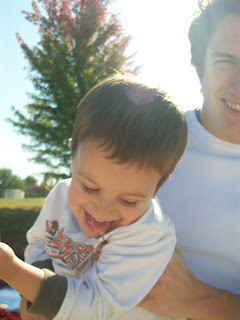 When I tell people we don't watch tv, their first response is almost always,

"Well what do you do then?"

I know that images of Jeremiah and I whittling and knitting by candlelight while the children play on the floor with a wooden top or look at books by the hearth have popped up in more than one person's mind as it has sunk in that we might be a little...off. (We might very well be, but it probably has nothing to do with television.)

Last year the Holy Spirit really spoke to our hearts and showed us that we were doing our family a disservice by watching tv. We had gotten into kind of a rut. I would have the tv on during the day, more as background noise and "for company" while Jeremiah was at work, and then he would come home and we would eat in the living room and we would be glued to the tv, and tied to it by whatever the show schedule was for that day. On the weekends, it was on almost all the time, and we felt like nothing was getting done around the house.

And worst of all, and it pains me to say this, is that I felt like we were ignoring our kids. We could be in the same room and not be interacting, because what had become more important for that moment was a dumb tv show.

Most people would say that what we were watching wasn't really "bad". And that is what alarms me- because what is called "quality family viewing" or "prime time television" is fraught with more violence, cursing, sexuality and sensuality, gore, and immoral behavior in the couple of hours than most movies. And this is what was allowed into our home every day, Im ashamed to say.

This is definitely not the "normal" thing to do, shutting off our television. But we haven't missed it one bit. I thought at first- how will we fill up all our time now? But I've found out that all that time we wasted watching tv was just taking the place of real quality family time.

We talk without having to turn the volume down, we play outside, things get done around the house because I'm not being pulled between watching a certain show and doing what I need to do, Ethan and Charlotte think reading books is the best thing ever. And I think we are more happy, better taken care of, and more entertained than ever.

See, God really does know what is best for us. TV can be a good thing, sometimes. But in this day, in this country, it has become something that can lead God's people away from his true and good purpose for their lives under the simple and harmless guise of entertainment.

I know that some people may think we are a little crazy. That's ok. I certainly couldn't expect everyone to choose this kind of lifestyle, biased as I may be. But to those who would balk, I would just say,

We are watching our kids grow up. What are you watching?