They Are Precious in His Sight

"Speak up for those who cannot speak for themselves, for the rights of all who are destitute."
Proverbs 31:8
When I first posted about Sasha, all I knew about these children is what I had read on the Reece's Rainbow website. Since then, I have read countless blogs about adoption of Down Syndrome children- people that had done it, or were going through it.
It breaks my heart that these children, because of the stigma of their condition, are torn from their parents and locked away in a building with very little hope of anything better.
Nightline did a series on Russian and Eastern European Mental Institutions where these children go on their 4th birthday if they are not adopted. You can watch it here.
It is... horrifying.
There are no social programs, support groups, therapies, counselors for families that dare to keep their child, if they are even allowed to. Most are removed from their families at birth or shortly after. They are disowned, they lose their jobs, their families, their marriages, all in the name of dedication and love to their child who, in their country, is called worthless, meaningless, and unwanted.
I read not too long ago that the abortion rate in the US of babies who are deemed to have Down Syndrome is 94%. Of all the babies whose test results come back as likely-positive of DS, 94% are killed. Roughly 66,000 children thrown away.
Deemed worthless.
But...
Did you know that the waiting list to adopt a Down Syndrome baby in the US is currently about 300 families long? That means that if you are adopting, and in your report, you say you would like a baby with Down Syndrome, there will be on average 300 families ahead of you in line to receive the very next baby with DS available for adoption.
These are some of the faces and names of children who are called worthless in their country. But they don't look that way to me. And they don't look that way to their Savior either. 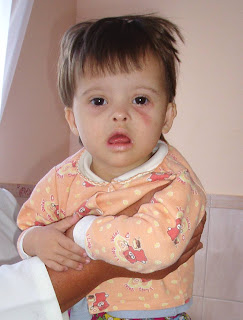 Girl, Born September 26, 2008
What a munchkin! Big brown eyes :) More photos available. Charity is a beautiful girl with Down syndrome. She was born with a heart condition, but has had corrective surgery and is healthy and doing well now. She is still crawling, and will greatly benefit from a loving family to encourage her development!! Maria N.
There are brothers or sisters
Birth Date: January 2008
Gender: Female
Nature: Calm
Look at this little pixie doll! Truly a beautiful child!
Maria is a typical little girl. She does not have a heart condition. She has "pancreatitis" in her medical records, but outside of that, she is growing and developing well. She will do wonderful in a family. This darling little boy was caught at a very sleepy time! Reeves is 3 1/2 and facing the institution in the Spring. He is considered significantly delayed, but he is medically healthy and will really blossom in a loving family!
* * *
And just in case you are wondering what it is like for these children , read this.
He has already been transfered to a mental institution, where neglect and abuse of all kind is rampant. If they are not valued in their own families, how much less are they valued at a mental institution?
I wonder how long he will survive?
(and just for reference, Caden weighed in at 17 lbs last month, at 13 months old, and he is small for his age.) Jacob is over 4 years old and weighs just 14 pounds. He is still very much a baby, even though he’s already been transferred to an institution. He lives in an environment with children that are completely cared for by staff and does not have opportunities outside of the institution.
His motor skills are significantly delayed. He can sit up unassisted, but does not crawl or walk. His report says that most of his time is spent lying in a bed. He shows interest in his environment and in toys and other objects. He recognizes his name and responds to it. His speech is significantly delayed but he is beginning to make sounds. He eats from a bottle and does attempt to hold the bottle by himself.

This is how we know what love is:
Jesus Christ laid down His life for us.
And we ought to lay down our lives for our brothers.
If anyone has material possessions and sees his brother in need but has no pity on him, how can the love of God be in him?
Dear children, let us not love with words or tongue but with actions and in truth.